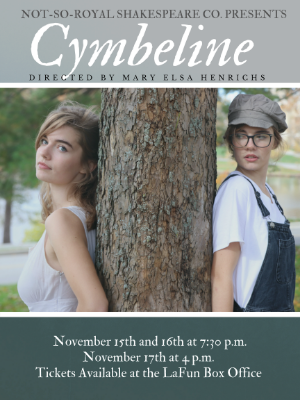 "What fairies haunt this ground?" Join us on one of Shakespeare's wildest adventures. CYMBELINE, a comical-tragical-historical-pastoral play set in ancient Briton, may be among the Bard's lesser known works, but it has the heart to make up the difference. SYNOPSIS: To attempt the writing of a Cymbeline synopsis is a fool's errand. But the play includes (and is not limited to): war between ancient Briton and Rome, a princess in disguise, kidnapping(s), an evil stepmother, decapitation, drugs that induce fake death. Ghost(s), eagle(s), and god(s) will also make an appearance on the stage.